Welcome to the Academy of Sport

Sport at Itchen continues to go from strength to strength. Every year we manage to secure an impressive range of trophies (see achievements).

Specialising in football, basketball, netball, hockey, badminton, rugby, golf and athletics, the Academy of Sport will improve your performance, provide a professional approach to your sport and help you to achieve your full sporting potential. Our Academy of Sport will enable you to pursue your sporting aspirations, whilst obtaining suitable academic qualifications from our wide range of courses.

The college timetable is structured to allow the Academy of Sport to fit in with all other courses that we offer. You will have six periods of the Academy each week, and these will include strength and conditioning sessions, sport specific coaching within your teams and college fixtures which take place on a Wednesday afternoon. We also enter elite national competitions in order to develop students' potential at the highest level.

The Hampshire Colleges Sports Association programme is the strongest in the country, providing you with weekly competitive fixtures against other colleges from September through to June. We pride ourselves on our dedication in producing confident sportspeople who demonstrate self-discipline, commitment and determination to be the best.

I am so pleased I chose Itchen College as my destination after school. They have been brilliant in supporting my football development. I have been fortunate enough to play for the Hampshire County team which led me to the great honour of representing the England Colleges team. I also chose Itchen due to their excellent work in gaining American scholarships for students. I currently have many offers on the table to go to America on a soccer scholarship. 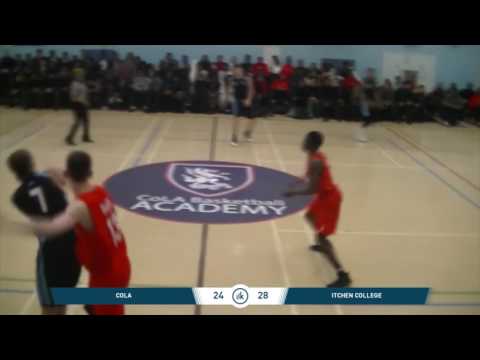 Kelly was one of our elite performers who managed to balance her studies with full time Gymnastics training, completing the majority of her work independently due to her demanding training schedule. She completed A Level Sport with an A and BTEC Sport Diploma with a D*D*. During her time at Itchen, Kelly had lots of career achievements, including gold and silver medals in the British Championships and a gold medal at the Commonwealth Games in Glasgow.

Kelly is now studying Sports Science at Southampton Solent University whilst also continuing to compete internationally. One of her recent highlights was being on the Gymnastics team that won a bronze medal at the World Championships in 2015. Kelly was also a reserve on the Team GB Olympic team for the 2016 Olympic Games in Rio de Janeiro, Brazil.

We are delighted to announce that Itchen College Netball Academy has been added to the Surrey Storm Pathway!   Itchen Head Netball Coach and Surrey Storm…

The Golf Academy recently travelled to Trentham Golf Club in Stoke to take part in the Intercollegiate Tour National finals. This was a 54 hole competition and…

Itchen College is not a sports college, but we are passionate about sport and that is reflected in our sporting achievements across a range of disciplines.…

Glenn is an FA Level 2 qualified coach and was instrumental in turning Itchen into the force they are now for football.

Steve Perkins manages and coaches the ladies' football team at the college.