Welcome to the Football Academy

The Football Academy has developed a highly successful reputation over the previous seven years and is currently a dominant force within the Hampshire Football Leagues. The Football Academy continues to grow and develop which has seen the first, second and third team wins their respective league titles.

The Football Academy consists of six teams. The first, second and third men's teams all compete in the Hampshire Colleges League and have three hours of training per week, as well as a competitive league fixture. The training consists of a high quality football session and a strength and conditioning session which follows a programme put in place for each player. The fourth and fifth teams participate in Hampshire Recreational League, play competitive fixtures against other colleges throughout the season and have structured coaching sessions.

The Football Academy has a reputation for developing its most elite players by having strong links with the Hampshire School Boys Team, the American Soccer Scholarship programme and also local clubs.

Our ladies' football team is highly successful and has won the National Cup finals four years in a row, along with many other titles. Several of our former team members have gone on to play professionally, including:

The focus is very much on providing effective progression routes for female footballers. We concentrate on developing players technically by basing our team play on a fast, short passing game. We encourage our players to progress to FAWSL club football or to consider the US Scholarship option. We also have excellent links with Southampton Solent University, and our home games are played at their excellent Test Park facility.

The environment that is created here is like no other and it's an amazing experience for anyone interested in sport. I feel that Itchen gave me a lot of opportunities to express who I really am and create bonds with teachers and students, which is why Itchen College make such a great team overall.

Our first men's team have previously won the Hampshire League for a record breaking seven years in a row! 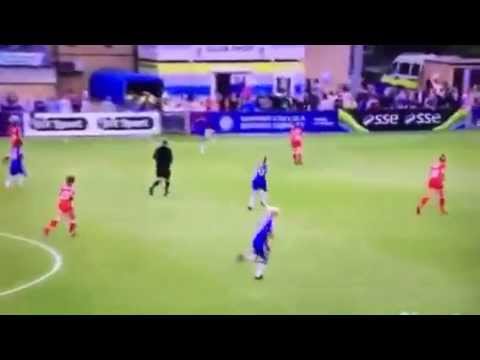 Jean-Luc has had a hugely successful year at Itchen. After being released by Southampton FC, he decided to continue his football development as part of the college's Football Academy, as well as studying for A Levels in Physical Education, Business and Economics. Jean-Luc was selected for the Hampshire County team before then going on to be selected for the England Colleges team. He has since been offered American soccer scholarships and hopes to go on to play football in the US.

Ellie played for the ladies' football team during her time at Itchen, helping to win a National Cup final, and studied Sport, Photography, CSLA and Fitness Instructor Level 2 alongside her Football Academy training. Upon leaving college, Ellie achieved a soccer scholarship with Owens Community College in Ohio, USA, spending a year at the university before returning to the UK. She currently plays for Portsmouth Ladies as a defender.

Aaron Martin played for the Itchen football first team throughout his time with us. He also played for the Hampshire Schools Boys team and the England Schoolboys team on several occasions. After leaving Itchen College, Aaron was signed by Southampton FC where he played for several seasons. He has since also played for Birmingham City, Yeovil Town and Coventry City. He now plays for Oxford United in League One.

Our Men's 2nd team had a fantastic day on Wednesday 5 April as they won the Hampshire Colleges' 2nd Team Football Cup.  The team played a hard fought match…

Our former student Jodie Brett has recently been selected to be part of the Under-23s England team which plays their first match against Sweden on 2 March.…

On Wednesday 1 February our ladies footballers got through to the final eight teams competing for the ECFA National Premier Cup.  It follows an excellent 3-1…